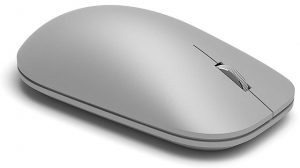 I helped a gentleman setup his new computer…

He said it had been a few years since he last used a computer… so naturally, I assumed a certain level of knowledge.

A few days later, he calls, saying he is have a great amount of difficulty using the mouse and that maybe I incorrectly changed a window setting to cause this…

So I go through some basic troubleshooting:

After a bit of head scratching, & asking him to right-click this & left-click that, he admits that there is no left or right button… just one in the middle…

Hmmm, did he buy an apple mouse by mistake?

OK, is the button on the left or right side?

Now the penny drops: He’s been using the scroll wheel as “The” mouse button…

So now its a leverage problem: move your finger further up towards the edge of the mouse & a fit further to the side…

Ah, finally he gets it… he’s totally amazed that the front flat surface of the mouse is actually 2 “secret” buttons that he never knew about!

i’ve had such a bad experience with lollipop battery life, that I went back to using kitkat

But now that I have 2 identical phones, I decided to compare kitkat with the latest android: Marshmallow

Although the phones were not setup identically, I did give Marshmallow some big advantages as follows:

Now, since I use my phone a lot, what concerns me the most, is the battery drain while the screen is on, & I’m active browsing, reading emails, & playing some trivial games like hill climb racing.

I then went into GSam, & looked at the battery “rate of change” chart, to see how efficient each android was…

Surprisingly (and disappointingly), I found that MM would drain at around 35% to 40% per hour… ie it would go flat in under 3 hours of constant use.

Given that KitKat was also powering a 4G SIM card, it should have been worse… but it drained the battery at around 20% – 25% per hour… ie it would go flat in around 4 – 5 hours.

Just to be sure, I swapped the batteries, & did the test again… & got the same results… so I’ve ruled out any differences in batteries.

As a result, I can guess that both Lollipop & Marshmallow have some major flaw, or an inefficient OS design.

As such, there is no way I will be moving away from Kitkat anytime soon.

The only reason I would recommend MarshMallow, is for those who only use their phone for 2 or 3 minutes per day, as MarshMallows “doze” mode means the battery barely drains while the phone has the display off.

YMMV (Your mileage may vary)

I had a customer that was having some emails disappearing, or more accurately: never arriving.

As with most people, she was using an email program (Mozilla Thunderbird) to download email from her ISP account at Optus (an @optusnet.com.au email address).

The first obvious step was to check the thunderbird spam folder: nothing there.

Next: did she delete them accidentally? No, the Trash was clear.

She then mentioned that sometimes she get warnings about her mailbox being full.

So I figure: ah ha… optusnet shouldn’t get full… so maybe thunderbird is misconfigured… I check the pop3 settings, & I see thunderbird is set to delete emails from the server after 14 days… all quite standard.

So… I’d better check the Optus webmail & see whats going on there.

As soon as I login to Optus webmail, I can see a problem: about 1500 emails sitting in the optus spam folder.

Hold on… did I see that right?

Optus diverts emails to spam BEFORE they can get downloaded to Thunderbird?

I spend some time marking all the spam as “NOT spam”… & while I’m waiting (yes, the Optus webmail is not quick), I do some research:

Turns out Optus Implemented a “new” webmail system in early 2013… customers have no option of disabling the spam filter… none.

And it gets worse: Optus is not good at detecting spam, so occasionally legit emails will go to “webmail spam”… where an average customer will never see it unless they use webmail.

In this case, I noticed some Optus “your mailbox is full” emails in the spam folder!

OK, so someone at Optus is brain-dead, fine.

Maybe I can get around this by re-directing (forwarding) the emails to, say, a gmail account?

No: Optus do not allow mail forwarding.

What about abandoning optus email, & going with one of the free ones like gmail? No: customer has many people who have this address & will not change email address.

So I now have to setup a desktop “webmail login” icon for the customer, & tell her to login once per week, & flag spam emails as legit… she struggles to understand why, but I do the best I can.

In the end, she will probably have to move away from the optusnet email, even if its a gradual “weaning” process.

Looks like Optus have taken a leaf (or a few chapters) from the Telstra/Bigpond customer dis-service manual.

There’s no denying that the tablet market has blown up in a major way.

Indeed, it seems hard to cast your mind back to when many people considered the iPad a ridiculous invention that would never catch on.  Those seeking a tablet in 2014 have a whole host of different options to choose from, which is why we’re going to take a look at how to go about choosing the right one, whether it’s a tablet hybrid from Lenovo or a Nexus 7:

The first major decision in choosing a tablet is which operating system you’d prefer to have.  It’s an entirely subjective thing (despite what many of the more passionate fans might say!) and it’s simply a matter of trying them out and seeing which one works best for you.

iPads will obviously use Apple’s latest operating system, with Android supplying the operational software for most other manufacturers including Acer, Amazon, Barnes & Noble and Samsung.

It’s also worth noting that there are now some affordable Windows 8 tablets making their way onto the market.

Needless to say, apps remain a key reason for the success of the tablet market.

For some people, they offer the ability to watch movies or YouTube videos, for others they provide the ability to edit photos.  Others, of course, simply like to relax and read a book.

The Apple App Store is certainly very well maintained, with nearly half a million programs and games available right off the bat.

Android has certainly stepped up its game in recent years in a bid to compete.  However, the Android store also has a reputation for being less well regulated in terms of security: a lot of malware-affected apps originate there.

Needless to say, the size of the screen also plays a key part. Tablets vary by a reasonable amount, usually between 10 and 7 inches.

Fortunately, most of the major models (iPads, Nexus Tablets and Kindle Fires) all come in different size, so you don’t have to be stuck with one brand just because you like the size.

Screen resolution is another important factor.  The more detailed the activities the tablet is being bought for, the bigger and more detailed the screen will need to be.  The Kindle Fire 8.9 currently offers the best in terms of pixels at 2,560 by 1,600.  The iPad’s retina display (at 2048×1536 pixels) is also excellent.

Wi-Fi and other connections

This is actually a major characteristic, and one that inexperienced users will often forget to take into account.

The ability to connect to 3G/4G is something that does add a bit to the price but for those that want to access the web when out and about, it’s not really optional.

Those that just want to use the tablet at home, however, could probably get away with just Wi-Fi.