I came across this repair software when I was searching for alternatives to reinstalling Windows on a client’s PC. I was pretty sure there were a couple of viruses on the computer, as it was very sluggish, and after doing a few general fixes to the PC, a complete reinstall of the Windows operating system was necessary. At this point I decided to give Reimage a try to save some time.

Here are my findings:

I first downloaded Reimage and did the free scan, which took maybe 5 minutes.  This scan is done to compile data about your PC. You get a hardware profile of your PC’s hardware (memory, disk space, CPU temperature), compared to a worldwide average.

Reimage will scan your PC for:

PC Stability –Compiles a graph depicting which programs on your PC crash the most often.

PC Security – Scans for malware threats and uses 3 different ways of checking if your files are indeed a threat to your PC’s security. It then lists all the malicious files it’s found. These files are “tagged” for repair during the repair step.

After the 5 minute quick scan, I got the PC scan summary. I then purchased a license key to start the repair.

Reimage then started to clear all the faulty files found on my client’s computer. There were a few viruses found during the scan, which Reimage quarantined.

Then it was on to repairing damaged files and installing the fresh files from Reimage’s up to date online repository of Windows files. These files are downloaded from their servers (based on my geo-location) and are tailored to the exact Windows operating system the PC was running on.

After the new replacement files were downloaded to the PC, the stability check made sure that all issues were resolved completely. This is done by comparing the now fixed PC to the original scan report.

After being prompted to reboot the PC, the entire repair was done.

This one program saved me the hassle of doing all this work manually and even saved me from taking days to back up and reinstall the entire operating system. Viruses were quarantined and even the virus damage was completely fixed. After thoroughly checking through system files, everything appears to be intact (no personal files were touched) and it’s almost like a new and complete operating system. 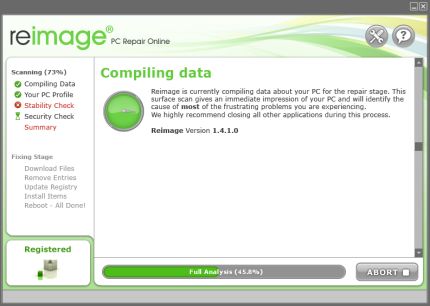 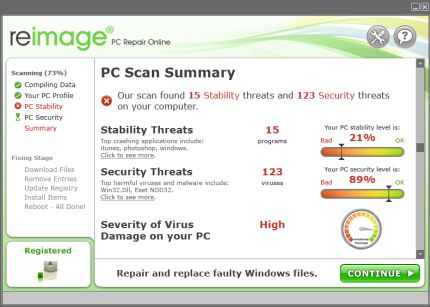 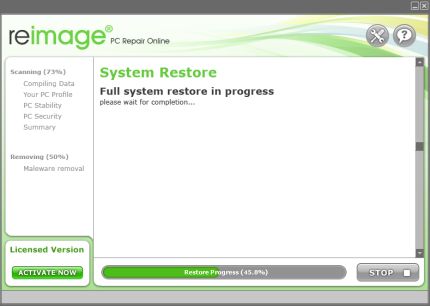