↓
Home→Technical→reprap: how to photocopy your own photocopier!

I stumbled across this amazing site: RepRap

Its basically a machine that can currently create 60% of its own parts (In a manner of speaking: a photocopier that can almost photocopy itself) 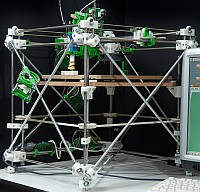 Besides the implications on the manufacture of certain goods (and scaremongers fear of being one step closer to a terminator-style skynet ), it reminded me of an amusing “joke” I read, on usenet, many years ago:

Xerox officials held an emergency press conference on Thursday to announce a total recall of all Reprotron 5000 Three-Dimensional Copy Machines.

Xerox stock has plummeted to a new all-time low since the release of the innovative device.

Xerox hailed the Reprotron 5000 as a “new revolution in copying” when it introduced the machine just two weeks ago, and market insiders were certain that the copier would send Xerox stock through the roof.

At a demonstration of the Reprotron in August, Xerox staffers made full three-dimensional copies of an Oriental vase, a bowl of fruit, and a perfect red rose.

Reporters were invited to sample apples and oranges copied from the original fruit, though Xerox technicians did warn that the copied fruit might taste slightly of toner.

John Thompson (inventor of the Reprotron) stepped forward to make a copy of a Manhattan phone book, but accidentally copied his hand and forearm. He quickly disposed of the highly detailed, frantically wiggling half-limb as it slid out of the copier’s delivery slot.

But Xerox wasn’t ready for what happened next.

“We assumed that people would behave as responsible, thinking human beings with this copier, and obviously we were wrong,” Thompson states.

From all across the USA, reports have been filing in of the copier being used in what Thompson calls “sick, greedy ways.”

At a Copy Center in Austin, Texas, a couple was arrested for making 15 copies of their three-year-old son, Jeremy, and then refusing to pay for the copies, claiming that some of the new children were “smudged.” Local authorities were uncertain as to which charges should be pressed.

In Union City, Arizona, Treasury Department officials are investigating reports of a secretary who allegedly copied a single bar of gold bullion 150 times. A task force investigator stated, “Granted, it takes money to make money, but we’re almost certain that this action is in violation of some laws.”

Xerox officials are also under fire from consumers, due to rumours that the three-dimensional copying technology is imperfect. Harold Butz of Peoria, Pennsylvania, made a copy of a common cement brick spray-painted gold. Butz claims he was “shocked and dismayed” when he discovered that the machine-made copy was 22-carat solid gold. “All I wanted was a really good copy of a cement brick spray-painted gold'” Butz stated. “What the hell am I going to do with this thing?”

Xerox plans to scrap all the machines they are able to recall, but Thompson expressed concern over the so-called “black market Reprotrons.” “Apparently some sick and greedy people discovered that if they had two machines, they could use one to make a working copy of the other,” Thompson revealed. “To tell the truth, we only sold two machines in all – to the Cappelli family, a New Jersey based Meat packing firm.

These copy pirates should be aware that as with anything that is copied from a copy and so on, there are bound to be defects in the copies produced. We have no idea what kind of stuff will pop out of the slot when a person copies something on a fourth- or fifth-generation machine.”

Thompson declined to comment on reports that hundreds of the pirated machines have a human thumb attached to the coin slot which constantly wiggles – the result of a person’s thumb getting in the way during one of the original copier-to-copier copies.

“Ultimately, we’re not too worried,” Thompson stated. “People owning the copiers will eventually run out of the fluid that make the machine work, and we’ve taken all the fluid off the market. A machine can only last two weeks or so without a fluid refill, and there won’t be any fluid refills.”

When asked why people with copiers couldn’t simply make copies of the fluid cannisters they already have, Xerox officials hastily ended the press conference, stating that they “need to reconsider a few things.”