Yet another funny variation on a common IT technical term.

This time, a customer calls asking for a price on upgrading a motherboard, CPU, and RAM. He also mentions he purchased a hard drive from the net, and would like to know if can use his existing CD drives.

After a while, I notice he has stopped saying SATA and has started saying “Santa”…

He was talking about IDe drives and Santa drives.

It was a deliberate decision on his part, and made the discussion really amusing. 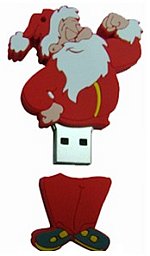