This PC had many problems. On the surface, it should have been quite reliable:

But it would often crash, generate BSODs, sometimes wouldn’t start, sometimes the bios would say “overclock failed” (it wasn’t overclocked)…

A few months prior, I had pinpointed a power supply issue (it was an old 500 Watt PSU, so I replaced it with an 860 Watt unit).

Well, after a lots of trial and error, I eventually unplugged most devices (ie only 1 stick of RAM, 1 HDD, 1 DVD drive… and then I noticed that the PC would fail when I started a graphics-intensive screen saver (Hyperspace from http://www.reallyslick.com).

The 2 month old PSU would make a high-pitched squeal for about 2 – 10 seconds, then the PC would “die”.

I was scratching my head thinking: the PSU must be powerful enough to handle the PC…

I plugged in a cheap video card, and the PC suddenly became rock-solid… no weird errors. 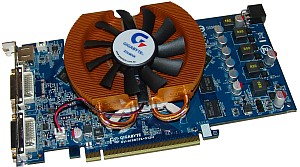 I researched the power consumption of the 9800GT card, and I see it uses anywhere between 150 and 250 Watt!

OK, its quite possible that the video card drains so much power, that some PSUs just can’t handle it.

I replaced the 860 Watt Power supply with a similar (but better quality) one, and everything ran well once again.

I returned the PC to the customer, with a warning of possible future problems: if this starts happening again, you will need to buy a much more expensive, 1000 Watt power supply.

So I re-learned something: a high-end video card will sometimes force you to buy a high-end power supply.