A common problem with Linux file-server networks, as well as small-scale home networks.

You try to logon to a remote network system, so that you can get access to a file/folder.

You enter the details (if its another windows PC you are trying to access via file sharing (not homegroup), you enter the user / password of the remote Windows user).

You tick the box that say: “Remember my credentials”.

Everything then works well until you re-start the PC.

Then you find Windows didn’t remember your credentials, and you need to enter the username / password again!

And there is nothing obvious you can do to fix the problem.

Here is how to fix it:

On the computer that keeps forgetting:

Start -> Control Panel -> User Accounts -> Credential Manager ->If you see your login details at this point, they have probably been saved incorrectly, so click on the incorrect details, and it will expand, so that you can click “remove from vault” 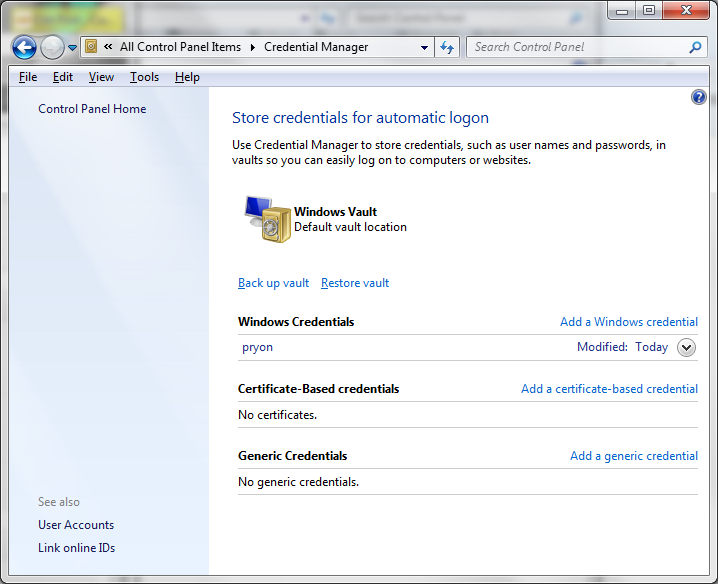 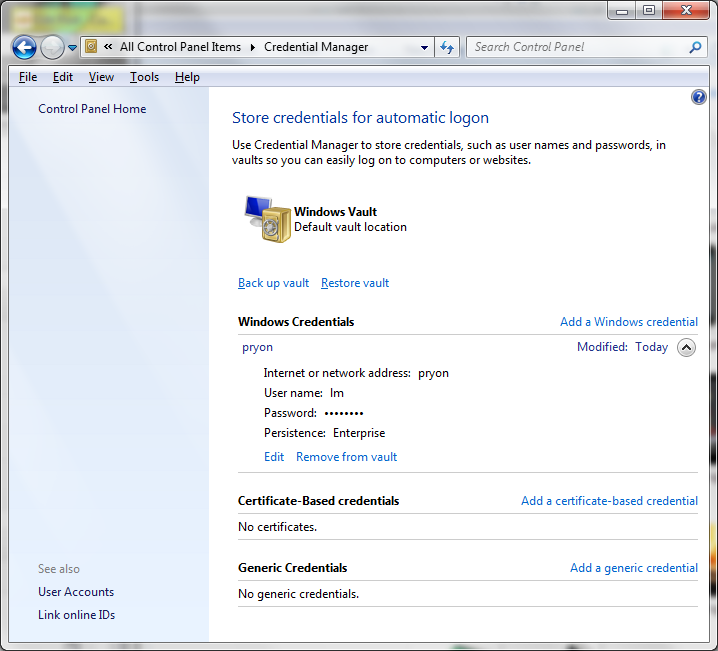 enter the remote computer / server name, the username, and the password, then OK.

Now restart the computer, and you can connect to the remote PC/server without the hassle of entering the details every time.

A while ago I got called to a client with the complaint of “not able to connect to the internet.”

The setup turned out to be unusual. A PC in the lounge connect via ethernet to a D-LINK router which had a D-LINK wireless (WiFi) adapter added.

Returned with it to my workshop and connected to my network, then spent several hours scanning and cleaning with various anti-malware and antivirus programs.

I also was not happy the 3rd Party firewall so uninstalled it and installed a new one. I was able to see my wireless network so I returned to the house and reinstalled the box and found the wireless adapter was working again.

I had a look at what networks were visible and found 4. Two had unique names and 2 were just D-LINK. All were strong but only one of the 4 was secured so I had the client watch while I powered off the router and restarted it.

As I suspected it was one of the unsecured D-LINK’s.

I went to the lounge computer and tried to get into the router but found it was password protected. It appears he was with a new “Partner” and the Lounge computer was hers. He rang her at work but she had no idea what the password was.

I extracted the email password and tried it but that was no good so we rang again and was told her next day off was the following Saturday.

I suggested that I call then, and we would phone her ISP’s help line and get them to issue a temporary password then I would reset the router and set it all up again. I arranged for her to phone me on the Friday and confirm that she would be home.

I was paid for what I had done and left.

Friday came and nothing…

I rang on Saturday but no reply so called on Monday and she apologised but she had forgotten, so the arrangement was to be repeated the next weekend.

There was no call so I gave up and can only presume it is still running unprotected.

At first, this sounds like a simple internet dropout.

I see the modem has a DSL light, so it looks like the internet should work… but it doesn’t.

I ask (as I usually do): has anything been changed recently? The answer is no.

Once connected to the modem, I can see that its “disconnected”. I hit the connect button, and it seems to work… but still no internet (no web pages, and no ping).

I try ping from the modems tools section, but I get no reply.

I try a factory reset, but that mostly doesn’t work… I managed to get 1 webpage working, and then nothing.

At this stage, I’m starting to suspect a faulty modem. I bring in my spare modem, to see if that will work.

She says only her hubby is authorised to discuss account details with bigpond.

Ok, looks like she will need to ask him to call bigpond, and add her as an authorised representative, so that she can get bigpond to talk to me, and I’ll see if a password reset is worth trying… phew!

After phoning her hubby, she tells me she knows what the problem is: A few days ago, hubby rang Bigpond, and increased their download limit (kids downloading lots of music, etc). For some reason, the password got changed… but he forgot to tell anyone.

Once I use the correct password, everything worked perfectly.

Its amazing how just 1 wrong piece of information, can lead to 90 minutes of running around, getting nowhere.

Customer called, saying he has a ubuntu system, but it stopped booting up correctly, and mentions things like fsck, and unmounting filesystems. He also admits that he pulled the power on the PC, instead of shutting it down correctly…

Over the phone, I manage to figure out that the root filesystem needs to be checked, but it seems that theres a catch-22 situation (which is, unfortunately, very common amongst many modern OS’s): main filesystem is corrupt, so OS cannot start… but filesystem cannot be fixed unless the OS starts…

When I get there, it looks like he has xubuntu, but all linux distros should have standard filesystem types (ext2, ext3, reiserfs, etc)… so it shouldn’t be a problem.

I boot from the CD, find I need to do fsck /dev/sda1 but its currently mounted.

OK, I try umount /dev/sda1, but I’m told /dev/sda1 is not in the fstab file… I eventually umount it (indirectly) by using parted

but when I try to fsck /dev/sda1 I’m still told it is mounted (and I’m not root anyway).

I try to login as root, and to su – root, but I don’t seem to have the correct password.

At this point, some research is in order. So I connect up my temp PC to the customers internet, and find out that ubuntu disables the root account (but that administrator commands can be done by using the sudo command).

Ah, this feels a bit more secure than most linux distros I’ve seen… I might take a closer look at ubuntu in the future.

And after about 5 minutes, it completes, with what looks like a few minor errors (which got corrected).

I remove the live CD, and restart the PC… and this time it starts correctly. Good.