I finally got sick of my 3 year old Navman GPS satnav.

Given that I like the way Tomtom do their map updates over the internet, and also allow you to get map corrections for free, then I decided to upgrade to something more modern. 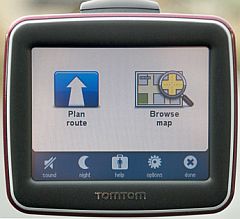 After having used it for a few weeks, I can now report on the good (and not-so-good) aspects of the tomtom.

Given that this is an upgrade from my older Navman ICN320, I should find it significantly better than my old unit.

Anyway, the screen is big and clear, and after exploring the various touch-screen options, I could find most of the essentials.

One problem I had initially, was adjusting the volume of the spoken directions. Its not intuitive to touch the speed indicator (bottom left-hand corner), to adjust the volume. After a lot of searching, it seems that thats the only way to do it.

Another annoying problem, is finding a street, without knowing the suburb… I often know the street, but the suburb might not be correct.

The Start will always insist on a suburb… and if the street doesn’t exist in that suburb, then you have to trial-and-error some surrounding suburbs, until you find the correct one… Once I was in a hurry, so I had to look in the “paper” map book, to find the suburb, so I could enter the @$!% street.

And this gets even more confusing if a “new” suburb is formed. At one point, I wanted to go to a street in Scarborough. I knew the street was there, but the satnav said it didn’t exist. Only after exploring the “browse maps” section, I noticed (accidentally), that part of Scarborough is now called Newport… Grrr

An obvious solution is to offer to search nearby suburbs for the street.

Anyway, the voice directions are very clear, and there is a huge range of voices to choose from (and if you are a Doctor Who fan, you can even download the “Dalek Tom” voice… its really cool).

It doesn’t have “lane guidance”… but I found the directions clear enough, that I doubt I’ll be wishing for that feature.

The routing is good… it gives you an alternative if you don’t like its initial suggestion, and it usually finds the quickest way to your destination.

After having done the “school run” for a few weeks, I notice it always tries to take me a particular way (which I know takes longer)… I usually go “my” way… it is quicker. But it would be nice if someone could develop “smart” software that learns from the routes taken, and then uses the information it gathers to figure out better routes (ie software that learns as you drive”. I guess the technology just isn’t there yet.

The on-screen display is a bit slow to update when you go around a sharp corner, but not enough to be a problem.

It has a lot of potential to customise (eg you can customise the startup and shutdown screen, the day and night map colours, voices, etc)

The unit is incredibly small and light, so it doesn’t block your vision in the same way that a larger one would.

The windscreen mount feels solid and secure… but only time will tell how well it holds up against a Queensland summer.

And speaking of summer, I’m curious how long the LiIon battery will last in the heat.

It also changes the colour of the indicated speed, if it thinks you are going faster than the speed limit.

I’d say the best feature is being able to connect the Start to the computer, so that I can download internet updates via tomtoms map share software.

After a week I did have a problem with actual unit: it would no longer be recognised by any computer (but the navigation still worked well). After trying all sorts of ways around the problem (including a factory reset), I eventually took it back to the store and had it exchanged.

Something that some people will not like (particularly with left-hand drive countries like Australia, great Britain, and South Africa), is that the power button is behind the unit… top right-hand side. Since I like attaching it to the far Right-hand side of my window, near the door pillar, I can’t reach the power button without reaching up behind the unit, from below… quite awkward. Its obviously been designed with right-hand drive countries in mind!

In conclusion: Satnav units will probably never be perfect, but its pleasing to see just how far this technology has evolved in the last 3 years.

Update: my second unit has now developed the same problem as my first unit. The error is: “USB device not recognized”. It seems like the TomTom start has a serious flaw. I assume that having the problem happen to 2 devices signifies a significant problem with these devices.

Since the main reason for buying a TomTom is so that I can do web updates, then its looking like I’ll have to pick a more expensive model… I’m not happy!