A client wanted a larger HDD. The MB had both IDE and SATA and looking at the prices of each, the SATA was 1/2 the price

I came to the conclusion that the MoBo was very early generation SATA and just didn’t like the new one, even with the jumper changed

I had to bite the bullet and purchase a 320gb IDE (cost? Ouch) LOL

The performance now was good 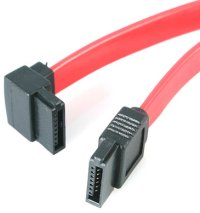 I recently wanted to fit a new SATA drive into an older Compaq PC with a A7VBX-LA motherboard.

I thought: hey, its got 2 sata sockets on the motherboard… no problem.

OK, that should be easy: just change the bios setting to make SATA emulate IDE (or even jumper the HDD to 1.5Mb/s as well.

Nope, there is no way the bios can detect the drive.

I search the web and find an interesting situation: Apparently Compaq commissioned Asus to develop this motherboard… SATA support was not part of the deal.

But now, nobody is taking responsibility for “developing” any bios updates.

So now the A7VBX-LA could support SATA drives, but nobody is going to update the bios to do so.

What sounds like a simple task can sometime end up being more complicated than you think.

In this case, a customer purchased a new PC, which had a new SATA2 hard drive and a SATA DVD-RW.

But he couldn’t install XP.

Either the XP CD would say “Setup did not find any disk drives installed in your computer” or:

Sometime XP would install, but after a reboot, XP would Generate a blue screen error (BSOD).

The first thing I did was to go into the BIOS and change the HDD SATA mode from enhanced to “compatible”. This makes the BIOS treat the SATA hard drive as an older IDE HDD.

But even after that, the BIOS would sometimes not detect the CD drive or the HDD or both (depending on which sata socket the devices were plugged into).

After a while I noticed that the SATA drives were only detected if they were in the “master” plug.

After some careful thought, I realised the hard drive and/or the DVD-RW might be trying to run in “SATA2” mode (ie Sata 300), but the motherboard/BIOS might not work properly when it is set to compatibility/ATA mode.

So I pull out the HDD and DVD-RW drive, and I see that the HDD has a jumper to force it to work in SATA 150 mode. I install the jumper.

After that, XP installed without a hitch.

So remember: Don’t just change the BIOS SATA settings, you might also need to add a jumper to the HDD itself.

A new customer rings, saying he has trouble starting his system, but it sometimes works if he unplugs some devices from the USB ports.

When I get there I find a nice games system… It would have been state-of-the-art about 2 years ago & is still a high-speed system by todays standards.

It has two 35Gb sata drives (10,000 RPM) using striped RAID (Motherboard has a built-in raid controller)… That makes for a very very quick disk system. The RAID disks have windows XP pro and mostly games on them. There is also a 200GB pata drive, with mostly music on it.

The systems doesn’t boot at all: it says that it cannot find any boot disk. Since I’m not familiar with this particular RAID setup & the RAID diagnostics are virtually non-existent, I ask if I can work on it from the office, but I tell him not to get his hopes up, as the RAID setup might have gotten corrupted (he says it happened once before, so he is already expecting the worst).

He also mentions that the 200GB drive was added about 1 year ago & he started having problems with the system since around that time.

Once at the office, the system boots just fine… I tell windows to do a restart & it goes back to its non-booting self. 🙁

I leave it off (power cord unplugged) for an hour, & then it starts again. This time I let it run for an hour & the system works fine… I disable the windows indexing service, & clean out the tmp directories, and there are no hiccups, even a file system check works flawlessly.

At this point, I start to suspect the 400 watt power supply & its ability to start 3 HD drives, 2 CD/DVD drives & a seriously quick AMD athlon.

I scavenge an older 300watt PS & connect it to the HD drives… Damn, these modern power supplies will not work unless there is a motherboard connected, so I also connect it to a pentium 2 mobo.

I start up the drives, then & fire up the AMD system… it works, but then fails after a restart.

I look closely at the AMD system… looking to see if there is anything else that could be causing a severe power drain.

I disconnect the CD/DVD drives, but to no avail.

I disconnect the 200GB pata disk, and all the problems disappear…

Ok, I remove the external power supply “life support” & run everything from the PCs 400watt PSU… it works just fine.

A faulty 200GB drive? I test it on the pentium 2 system nearby, & it works perfectly.

Now what else could be causing this??? At least the customer is happy to hear that he hasn’t lost anything.

All the components work well in isolation… as long as they are not all joined together.

I start to suspect the “k8v se deluxe” motherboard. There are many internet forum topics about this mobo & problems associated with it.

Nobody else seems to have the exact same setup (sata raid plus a plain pata drive), so there is no direct answer to this problem (and I don’t have the time to ask the question on the forums).

I suspect a bios upgrade could fix the problem (mobo has bios version 1003 & the latest available is 1007).

Given the risks in upgrading the bios:

– a loss of raid configuration

– a worse or more subtle problem

And given that the customer already has another computer system, I reckon the quickest solution is to put the 200GB disk into the second system & share out the drive over the network.

Since the customer has a 4 port router (which he was unable to setup, so he currently has just 1 pc on the internet at a time). I offer to set it up & install the 200GB disk into the second system.

I return the system, setup the 200GB drive into the second system, but encounter problems with the router… but thats another story.

A business client I had dealt with previously, called to say their new computer is no longer starting (something about IDE drive not found).

These people have a 2 month old computer & I previously helped them migrate their outlook settings & fixed a faulty modem, so I had previously opened up the box.

Got there & it looked like the bios couldn’t detect the hard disk… I told them it might be a simple fix, but worst-case, the HDD might have failed, which would probably involve a very tedious re-install of most applications, & a total loss of old emails (they only backup their accounting data). This generated a few shocked looks, but I hope it motivates them to moving to a more comprehensive backup strategy (I’m happy to help them implement a simple DVD backup, but the important thing is to get a good backup happening, regardless who does it).

Fortunately, I just had to unplug & re-insert the SATA plug, & everything was back to normal.

Its just odd that this happened soon after I had fix another problem for them (i had swapped modem cards, but didn’t touch the SATA cords).

I just hope they are not the “suspicious” types and think I had sabotaged their computer the first time, in order to get a second callout. I prefer to do just 1 good job, in order to maximise referrals.

Anyway, I did my best, so I’m not going to worry much about what others might think of me.