A customer needed to get his wife’s eee laptop on the internet.

So I install a wireless router (and setup wireless security).

All pretty standard stuff so far.

But I knew that the Eee would be interesting.

Research seems to show that the Eee could have some problems with wpa, but I thought I’d give it a try anyway.

Some guides on the net seem to guide you through using the network icon to setup a wireless connection (and you get advised to stay away from the “Wireless Networks” icon.

First, I made sure the wireless is on (blue light on the bottom right hand side… activated by pressing Fn + F2.

Well, after stuffing around for about 20 minutes (and getting nowhere), I eventually decided to try the wireless networks icon.

First, I got a view of available wireless networks (Don’t disable SSID broadcast of your wireless access point!): 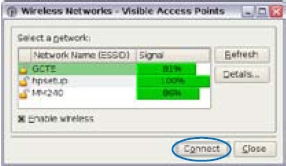 Select the wireless network, and hit the connect button.

You then get another window, where you select the wireless encryption type, enter the password/key.

And thats all it takes!

At some point, I made sure the new wireless connection was set to run at startup, so that it would always run when the pc was switched on.

I supplied a new PC to a customer.

He was retired, so he saved some money by getting his son to install a corporate XP.

But once he got it back, he couldn’t get the wireless internet link working.

So I pop over, enter the WEP details (the wireless router had been setup a long time ago, so I didn’t want to go change it).

But no matter what I tried, I just couldn’t see any networks to connect to.

So, I figure I haven’t much choice, I’ll need to connect directly to the router via ethernet, and setup a WPA network… I’ve developed a strong dislike for WEP.

So I setup the WPA-PSK settings in the router, reboot, and so far I can see the router.

I disconnect the ethernet cable, but when I try to connect to the wireless network, it just fails silently. No error messages, and no indication that there is a problem.

I check that XP is managing the wireless network connection, DHCP is running correctly, but after looking at countless wireless networks, this one doesn’t want to work properly.

So I find myself doing what I often do in this situation: I start to aimlessly browse the network settings.

Thats when I stumble across the cause:

And up pops a seldom used “networks to access” window.

Ordinarily, its set to “any available network”. If I’m setting up XP, I usually change it to “infrastructure networks only”… but in this case, it was set to “ad hoc networks only”.

Obviously there are people out there who still use ad hoc networks (I can’t see the point anymore. It was a useful a when access points were much more expensive, but not anymore).

A prior customer has bought a wii and xbox360 for his kids, but is having problems connecting them up (and connecting a newer/faster cable modem to the router)… all PCs are wireless.

So I work on the new modem, until I finally get it going after a few power cycles and peering at router firewall settings.

I then look at the Wii. It looks cool. Small, unobtrusive, unassuming, yet the wiimote controllers are great.

I get some help from http://www.wiichat.com/nintendo-wii-online/5820-official-wii-wireless-internet-connection-guide.html

But the router has MAC filtering (which is good for security, but makes adding new devices more problematic). OK, how do I get the Wii MAC address? In general, MACaddresses are printed on a small sticker on the device itself (eg laptops, wireless cards, etc)… but not on the Wii.

But I eventually found the MAC address by reading  wii mac

Ok, now lets try the xbox360… Hmmm, the interface is a little more confusing, and many settings are greyed-out… After much head-scratching it becomes obvious that the xbox doesn’t have built-in wireless networking… you need to purchase a wireless module!

Customer will go buy one, so I show him how to add a new device to the MAC filter in the router, and then I’m on my way again.

A customer cannot get broadband (housing compound uses a PABX), but wants to have 2 PCs share the dialup internet link (without any messy wires). He also wants me to look into a few other things, most of which are easy to do, so I do them while setting up the wireless network.

After some thought, I decide the best solution is to setup an ad-hoc 802.11G connection (both PCs run XP). I setup a pci wireless card in one PC, and a USB wireless card in the other (both are generic chinese cards – FAST).

After some hiccups (cannot install pci card into the PC that has all PCI slots used 🙁 ), I get the usb ‘card’ working well (I setup WPA-PSK with very little problem). But the other PC (with PCI card), behaves very strangely: The software won’t allow me to setup both WPA and ad-hoc.

I run out of time, so I make an appointment to return 2 days later.

I do some research and eventually it dawns on me: I’ve seen this before: both PCs must be running SP2 in order to use wireless networks correctly!

So when I return, I install SP2 and try it again… the software works better, but I still cannot use IBSS and WPA at the same time!

I decide that its probably not possible to use WPA and IBSS at the same time (although nothing on the net seems to indicate that the 2 are incompatible). So I fall back to WEP, and that works better… I see green bars, which indicate a wireless link has been established.

I do a ping test, but I get no response… Hmmm… why?

I ping from both computers, but no success. I change ‘automatically obtain IP address’ to a fixed IP address, but still no luck.

Anyway, it works, so I re-enable the XP firewall, and I look at setting up a bridged network (as per my previous post: another visit to the vet ), but it won’t work… xp insists that I use internet connection sharing… it only wants to bridge non-dialup networks. I figure: ok if it wants to do it like that, I’ll do it.

I setup ICS on the modem PC, then I do what XP recommends (let the second PC get its IP address automatically).

I dialup the net, then bring up a web page, then I go to the second PC & I can also view a web page: success!

The modem PC starts downloading a windows update, and I also start an antivir and spywareBlaster update… it will take a while, but I have achieved most of what I set out to do.

The only thing that I  couldn’t do was speedup his 1Ghz celeron PC. It ran unusually slow, and DVD playback would invariably result in stuttering audio and video. Diagnosis would be expensive, as would a windows reinstall with a full backup, so the customer will leave it for now.

I return to the vet, & after another check, I find I have no option but to setup wireless at his house & setup the office with a wireless card.

The house is easy (the PC runs win 2000, so I switch it from using usb to ethernet broadband access). I place the modem/wireless router on the windowsill, hoping that the signal will be strong enough to reach the office.

I install a d-link g510 pci card into the office pc, but installing the drivers causes some problems (the dlink wireless utility doesn't want to start). I get the latest driver & I also realise that I need to install the drivers before plugging in the card (whatever happened to plug and play?). So: uninstall the drivers, reopen the pc, remove the card, start the pc, install the latest drivers, shutdown, plugin the card, close the pc, start the pc, and hey, the dlink drivers start correctly (grumble grumble).

Ok, I'll try the dlink utility instead… everything is setup correctly, but the link adaptor remains disconnected…

I eventually realise that the PC is running xp SP1. Do I want to do an SP2 upgrade on this computer? After some thought, I decide to go ahead… the risks are minimal, & it should be done sooner or later anyway.

The install takes about 40 or 50 minutes, and after the reboot… yippee, I can get a wireless connection. Signal strength is 40% – 50%, which is fine, since I am running a wireless system myself, which sits at 25% – 35%, but no noticeable dropouts.

I try a ping to an internet website: no response, I ping the wireless router: its fine.

I reboot: still no internet.

Its getting late again (and the vet is getting busy with customers, so I decide to hand back the PC & arrange for another visit).

At this stage, I feel I'm so close to getting the internet working… probably just a simple setting somewhere. Or it might just start working spontaneously a few minutes after I leave.