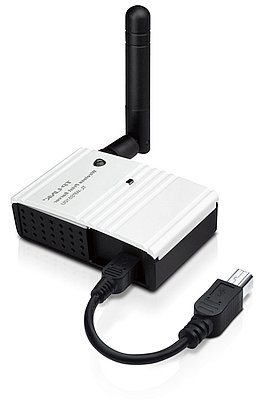 I was recently asked to setup a USB printer (a dymo) as a print server, so that everyone in a small company could print to it.

How difficult could it be? (famous last words)

I run the setup software from the supplied CD. The software detects the WPS510U, then finds the current WiFi network, then reconfigures the WPS510 to work “nicely” with the existing WiFi network.

Then the setup software re-boots the WPS510U so that it can activate its new settings, & start working.

So, after waiting 15 minutes, I realise something is wrong.

I reset the WPS510U back to factory defaults, & try again (in case I made a mistake), but I get the same results.

Reset back to factory defaults, then, as a workaround, I also try to configure it via the USB port instead. Again, once it resets to take on its new settings, it dissappears.

OK, maybe its faulty, so I take it back to my office to see if I can get it to work on my network… & it works! Flawlessly!

Obviously I did something wrong at the customer premises!

But it still vanishes from the customer WiFi network!

At this point, most people would just give up & plug the printer into a USB port & then share it out.

But I’m curious, so after some lateral thinking I realise the customer network is using WiFi channel 13 (I am in Australia, after all, and channels 12, 13, 14 are perfectly legal… But then I have had similar issues with a Wii console (shame on you, Nintendo!))

So, after I change the customer WiFi to use Channel 11, the WPS510U can finally configure itself correctly (shame on you TP-Link!)

So, now the final step is to connect the company PCs to print to the “new” printer… except half of them cannot detect the printer over the network!

OK, I know when I’m beaten… I now give up & just use the printer connected via USB directly to a PC, then share it out via windows networking.