OK, here is the setup:

The laptop, Globesurfer II, and cordless phone are on a small table about 60cm X 60 cm 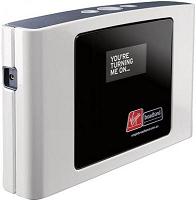 Laptop connects to the GlobeSurfer II (GS2) via ethernet cable.

GS2 has wifi disabled by default, so to get the Wii console onto the internet, I switch on the GS2 wifi by:

I then setup the Wii (also pretty standard stuff). The Wii connects, and it does its usual system updates. I also download some extra channels (everybody votes, opera browser, contest channel).

Everything is working well.

I figure: The laptop probably doesn’t need to use ethernet anymore, I’ll switch on its wifi, and get it running without a cable, so the laptop can “roam around the house”. This also works well.

A few minutes later, the customer makes a call with the cordless phone… She hears 2 ring tones, then silence.

She tries again, but no luck.

I try phoning the cordless (house) phone… but I eventually get a busy tone.

I’m told the phone sometimes drops out like this, but starts working again after a few minutes.

I know I didn’t change any phone setting within the GS2, but I take a look anyway.

I find a screen with a call log, and I can see all the failed calls are logged (duration 2 seconds).

Hmmm, I decide to try disabling the GS2 wifi, in case its interfering somehow… but the problem still persists.

Since the GS2 is back to its original setup, Its now looking like a possible Virgin network problem.

I ask the customer to call virgin and ask for help. She says she doesn’t have time now, and will do it later.

The next day, she say she tried to call Virgin, but could only manage to leave a message for them to investigate. In the meantime, she resets the GS2 back to factory default settings, and a few hours later, the phone is working again. So Virgin might have fixed something… or the reset to factory defaults did… not sure which.

She also reads the Virgin Mobile “manual”… and finds an interesting gem of information: wireless devices should not be closer than 30cm.

Now thats something I didn’t know.

So, on a small table, she had the GS2, the cordless phone, and a laptop, all within 30 cm of each other.

So she moves the cordless phone further away, and decides to stick with an ethernet cable connecting the laptop to the GS2.

So I do the same as my first visit (but just in case, I change the wifi channel from 11 to 1 (in case there was any channel contention).

Except for a minor spelling mistake (on my part) on the Wifi wpa password, it all worked well, and its still working a few weeks later.

Its situations like these that that make me wish for a wireless “interference” tester… If there is any wireless interference, I need to resort to trial and error in order to fix the problem.