A customer was specifically after an eeePC laptop.

After I got it from my supplier, I noticed a few strage things: the cursor would sometimes move automatically… and sometimes dialog boxes would automatically get “clicked”.

The annoying part is that it was intermittent. 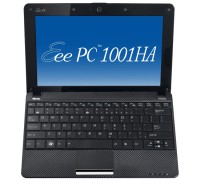 I decided to do a bios update, and a complete set of windows XP updates… but the problem was still there.

It seems like pressing any key near the “Enter” key, would make the keyboard act like the Enter key was being depressed… and with auto-repeat that happens when the enter key is pressed, the effects were really unusual.

Since it was a new laptop, I took it back to the supplier, who did some tests, and found that there actually was a fault with the keyboard and replaced it promptly.

I was told (I’m not sure if its true), that the CPU is under the Enter key, so once the CPU warms up, the keyboard is more likely to “act up”.