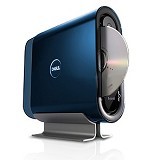 I was told there was a disk “stuck” in the Dell Studio Hybrid PC.

This is one of those cute “Apple look-alike” PCs.

Its a very small PC. On the front it has a thin slot for a CD/DVD, and on the front, starting from the top, it has a power button, a HDD activity light, then a CD eject light/button.

The CD eject button is not a “real” button, like the power button.

Instead, its a touch-sensitive panel, thats part of the front casing… no moving parts.

The strange thing is that the eject light only lights up if there is a disk in the drive.

So when I look at the PC, the light is off, and pushing the empty spot where the light should be, has no effect.

Is there a disk in the drive? Well, I cannot insert a disk, as its blocked by the disk already in there.

So now what do I do?

I don’t have any pliers thin enough to pull the disk out… and I’m not sure I should even try it.

So I decide to restart the PC, and see if there are any bios options that might help.

Nope, nothing… and no way to eject the disk while in BIOS either… even though the light finally illuminates while I’m looking at the BIOS settings.

So I now restart Vista… and once Vista has completed its startup, the eject panel lights up.

I press it, and the disk finally ejects.

I find out that the owner never shuts down the PC… so thats a reasonable explanation for the problem… with PC restart the solution to getting the CD to eject.